Mid-December Reflections on Chaos and Spanish Language Learning in Oaxaca

Leave a comment Posted by teachersactup-Melisa Cahnmann-Taylor on December 17, 2013

And the carnival rides. Their electric wires strung through the crowded city park where throngs of children and adults push between bumper cars, ferris wheels, tilt-a-whirls, and flying pirate ships that all seem too dangerously clustered together.  These aging rides decorated with paintings of braless, busty women and clown faces seem to go on forever: for less than two dollars a child goes round and round a small roller coaster track or up and down in tiny cages for more than five interminable minutes.  As an American parent I become frantic when I notice the coaster operator stops the ride to regularly adjust the track’s screws.  Where are the safety belts? Where are the big metal bars that prevent any child from slipping out, where’s the message to keep hands and feet inside the car at all times, where’s the height ruler to be sure my 4 year old is properly fitted in the seat.  Nothing.  Nada.

These rides look like they might be discards from long gone carnivals in Kentucky or St. Louis, finding themselves a new paint job and a second life here in El Llano park just like us aging gringos.  We are plugged in, we run long and hard, we are safer than we think.

“You never know what you’ll find when you walk out your door,” said Margie, a retiree from Sacramento who comes to Oaxaca for three months every winter.  “That’s why we keep coming back!” She declined my invitation to the Oaxaca Lending Library event that night in favor of a parade of men on stilts that would end up at a hot chocolate festival in one of Oaxaca’s stunning Centro Académico y Cultural San Pablo.

After weaving through carnival rides to attend the Library poetry reading, chocolate and stilts at San Pablo became my ultimate destination.  The stilt walkers’ wooden, padded sticks leaned against the cultural center walls much like the cactus vines growing up around them. Stilt walkers long down from their perch, the courtyard was now an obstacle course of puestos giving away bowls and mugs of chocolate atole, a thick corn based indigenous drink or “con agua,” the kind I prefer, made with water or as we know it, “hot chocolate.”  It didn’t take long before my gourd cup of chocolate runneth over onto my woven palm leaf bag, nearly missing my huipil blouse. 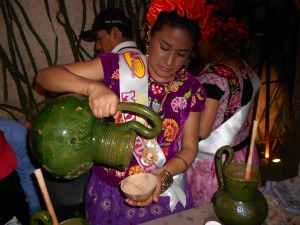 So much of what we experience this year in Oaxaca, Mexico this year spills over, unpredictable, messy, uncertain, surprising, chaotic, and alive.  It’s interesting to compare these festive impressions with what I have observed so far in Spanish language learning classrooms, including my husband’s class this morning.

Jason’s teacher this week is passionately committed to languages and speaks English with great fluency. But this program promotes the immersion method and never translates anything for Jason, preferring to give linguistic definitions in Spanish to explain lessons on language use—e.g. possessive adjectives (tu bicicleta/your bicycle) compared to possessive pronouns (la tuya/yours).  The teacher writes grammar terms in Spanish on a hand-sized white board, using “my markers” (mis marcadores) and “his bookbag” (su mochila) as examples.

They sit for 45-50 minutes on the steep cement steps of the Santo Domingo Church –and there are fewer confusions in this all-Spanish lesson than I might have thought would occur.  Ése es mía.  “That (one) is mine,” the teacher says, grabbing his backpack.  “Ése” was a review of demonstrative pronouns vs. demonstrative adjectives.  http://www.studyspanish.com/lessons/demonstratives.htm

Jason has begun to distinguish “ese” that and “es,” (“that” and “is”), even though the sounds tend to elide together.  Spanish for the learner is full of words spilling into one another, confusing tangles of phonemes and morphemes.  ¿Tú viste el partido? (Did you see the game?) The teacher asks, knowing sports are a welcome subject with my husband.  The learner is challenged to distinguish “¿tú viste…?” (did you see?) from its homophone “tuviste?” (did you have?). With context and practice, this becomes obvious and clear but in the beginning the rules and separations are beyond confusing.

It’s like ordering my kids some fries at one carnival puesto, and sitting at the nearby plastic table to learn that rights to sitting at that table belong exclusively to the taco seller.

How is one to know where the lines are drawn? What seat belongs to whom? What sound belongs to what meaning? Easy enough to order three tacos with our fries but less easy to learn complicated linguistic terms and structures and piece it all together.

Margie, the retired Oaxacan regular, says one season in Oaxaca she took private lessons 3 hours a day, 5 days a week.

“Even though I knew it didn’t matter, there wasn’t any grade or anything, I would always get so nervous before every single class.  I know its silly but I was always afraid I wouldn’t know something that I’d be expected to know, that I had learned the day before.”

My brave husband isn’t easily fazed but he, too, has moments of anxiety and uncertainty as an adult Spanish language learner.  He says he just has to accept that he won’t understand everything right away and is proud when our Mexican friend notices his language growth when we get together every few days or weeks.

December 16, my son stood in line for one of the first of nine numerous opportunities to beat a piñata for its candy at a posada, nine reenactment evenings of Mary and Joseph’s search for a place to stay in Bethlehem.  He is only six year’s old but towers above his peers and because of his size, earns the right to be blindfolded for his turn at the bat.  After a few successful whacks, he breaks the ceramic bowl and candy spills.  He tears at the blindfold and like all the other Mexican children, pounces down to grab candy amidst the pottery shards.  I lose sight of him.  A pile of children seems to have descended on top of him.  I frantically call his name.  “Oren! Oren!”

A girl points to the middle of the pack.  He emerges, hands full of candies, tusselled, unfazed.  My neighbor’s four year old son also rises from the fray with pockets full.  His father, who’d worked three years in Austin, Texas, just laughs.  “Todo bien, todo bien,” he assures me.  It’s all good.

I am constantly reminded that I over worry and over think, as a parent and perhaps also as a language educator and language learner.  Perhaps it is the acceptance of chaos, only partially be explained, that is the best lesson of all.